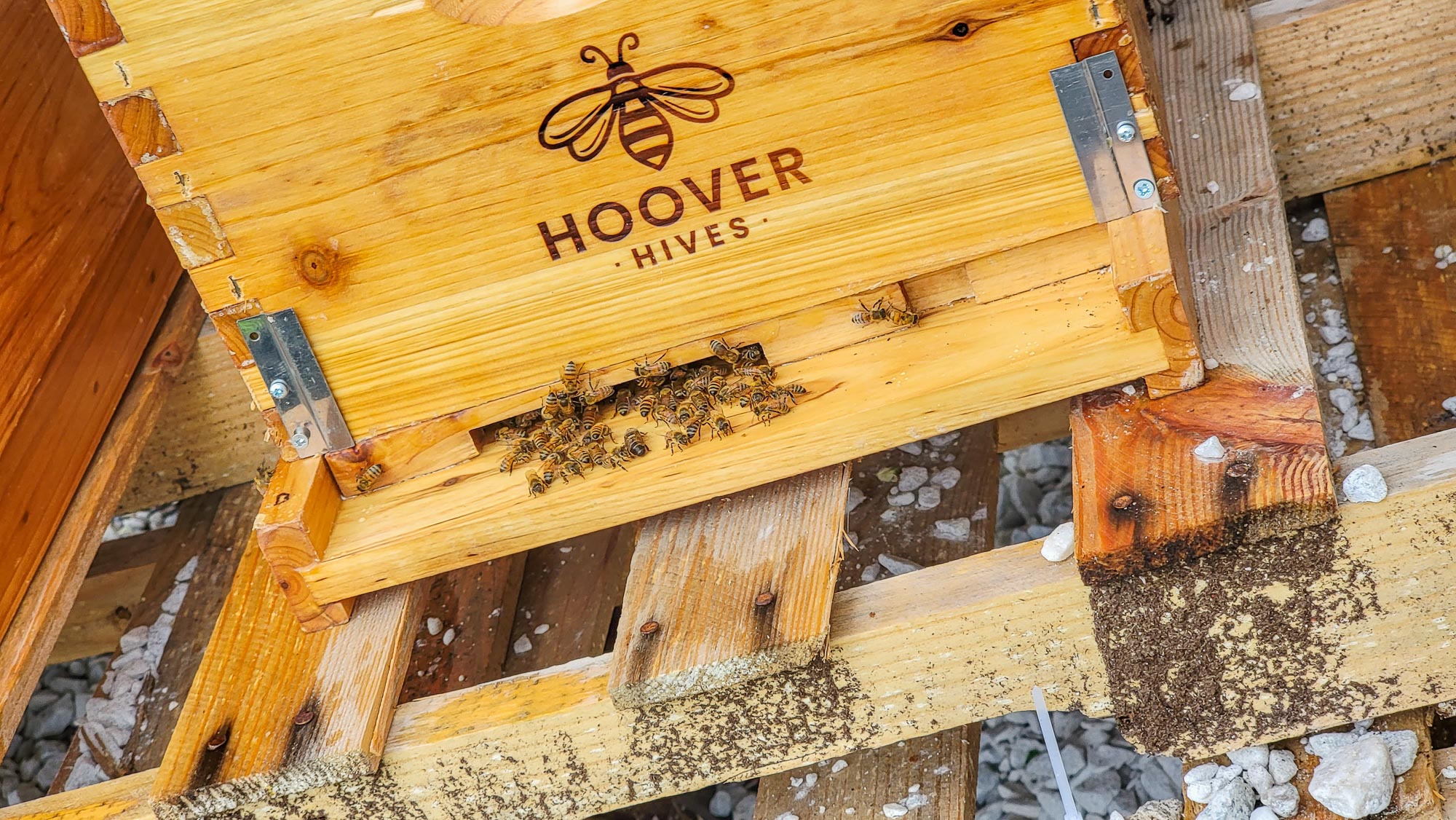 As we wind down our first year of having beehives at our house, I have to admit that I learned a lot- way more than I originally thought I would, if I am to be honest.

I made mistakes (plenty of them). I made some strides. I even got a little bit of a honey harvest out of one overly productive hive.

So while we are busy prepping for winter hibernation, I thought I'd take some time to look back on some of the biggest lessons learned in my first year beekeeping for others who are thinking of getting into it.

You Will Get Stung – But For Me Was Okay 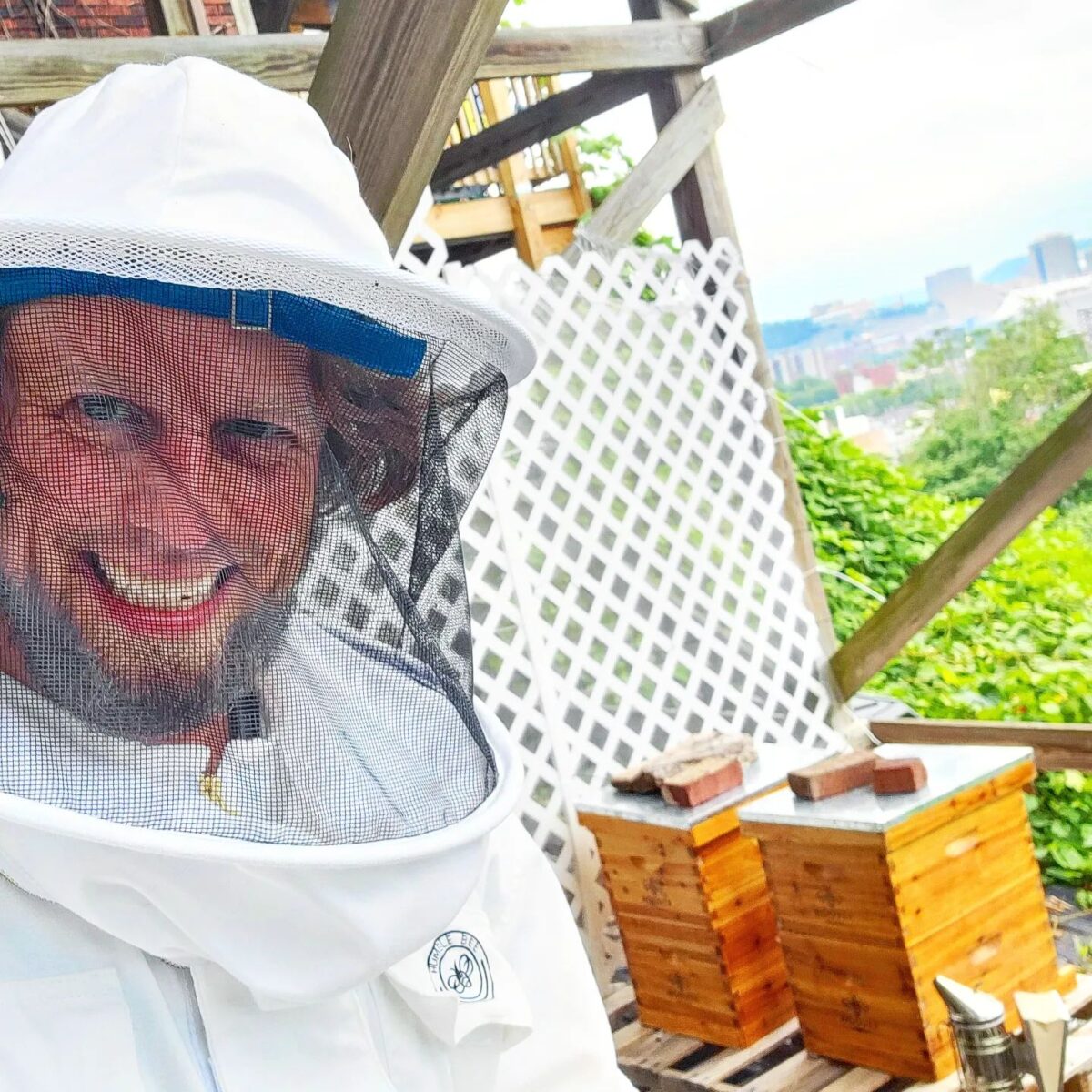 When I picked up my nucleus colonies, I took the time in line to get to know other, more seasoned beekeepers who were in line with me and pick their brains on what to expect starting out.

One topic that came up was getting stung. While I was mentally prepared for stings, especially on day one, I was rather shocked to learn that some of the beekeepers had never been stung before.

Well, take it from me, they were rare- you will get stung. I made it through my first few inspections without stings, but a few careless mistakes in mid-summer resulted in a sting on my back and two on my neck (not all at once). I am, thankfully, not allergic and any redness and sensitivity was gone in just a few hours, but this is an important point- you will get stung.

Don't treat this as a maybe. It is inevitable- likely in your first season. At some point you will get careless, your bees will get angry, and you will be a target. The only question is when, where, and how many times you'll be stung. If you are afraid, concerned, or especially allergic, then beekeeping may not be for you.

That being said, there are ways to minimize sting issues. Wear a full-body bee suit for starters. Properly smoke your colony before working in them. If your bees are acting aggressive, stand up, calm down, and let your suit become loose (all of my stings were because the suit or veil became tight on my skin when the bees were upset). I even added wearing a backward baseball hat under my veil to help provide extra structure, too.

My stings went down significantly from there. I will not say I will never get stung again, but the frequency has been drastically reduced. Thankfully, in being stung you also learn how your body reacts, which was not nearly as bad for me as I thought it would be.

We Are No Longer Afraid of Bees 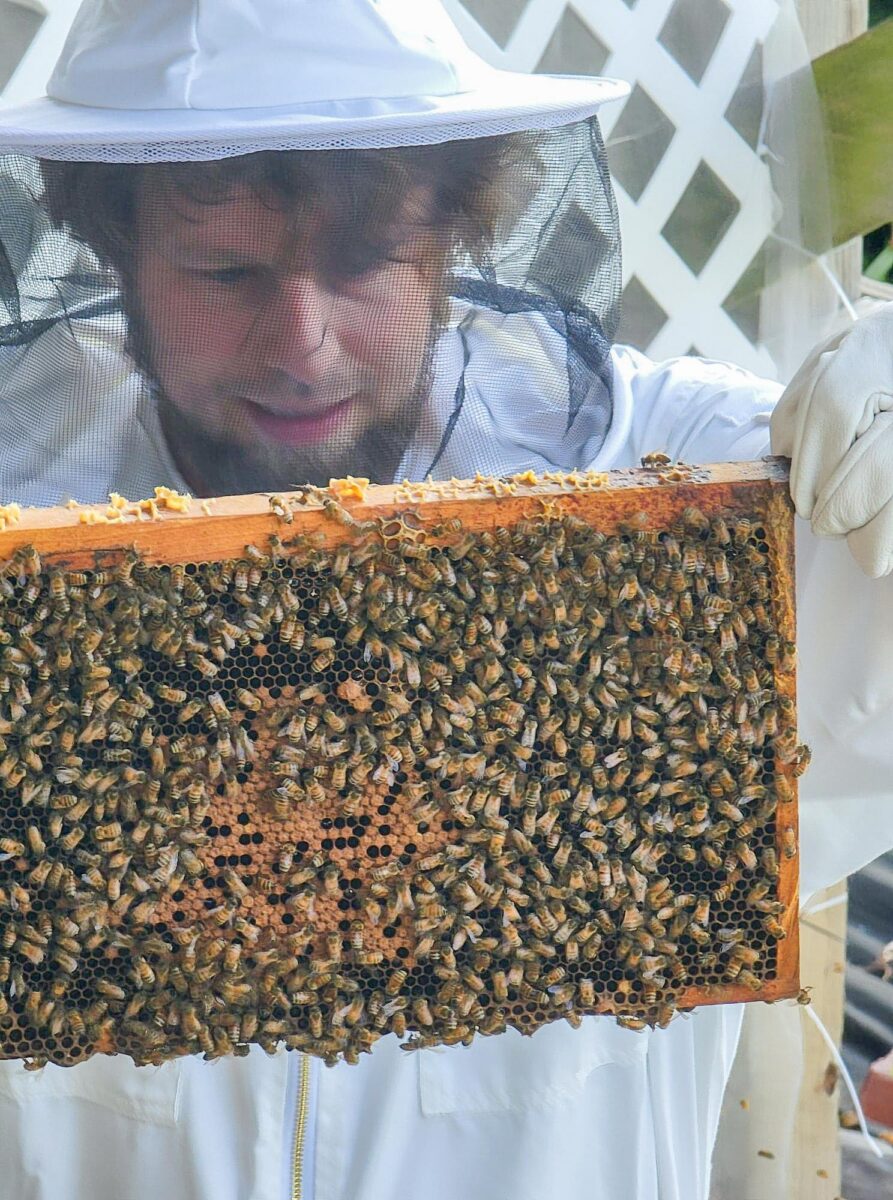 On that note, after spending many hours surrounded by tens of thousands of bees, I can safely say that my fear of bees is almost completely gone. This applies to Angie too, who, before we got bees, would be known for running out of a room in terror in a bee flew by and, early on in the season, would put my bee suit on when a hornet got into the house!

But not only that, we are getting pretty good at telling the different kinds of bees and wasps apart from each other. That one is an asshole. That one just wants to go outside. That one is a dainty little lady who needs to take pollen and nectar home.

As many people have an unjust fear of bees, often stemming back to a bad childhood experience, keeping an apiary at home is a great way to learn that most bees are not to be feared. Ultimately, you'll become a huge bee nerd!

Also, Angie no longer dons the bee suit when a bee is inside, thankfully!

You Need Two or More Hives at the Start 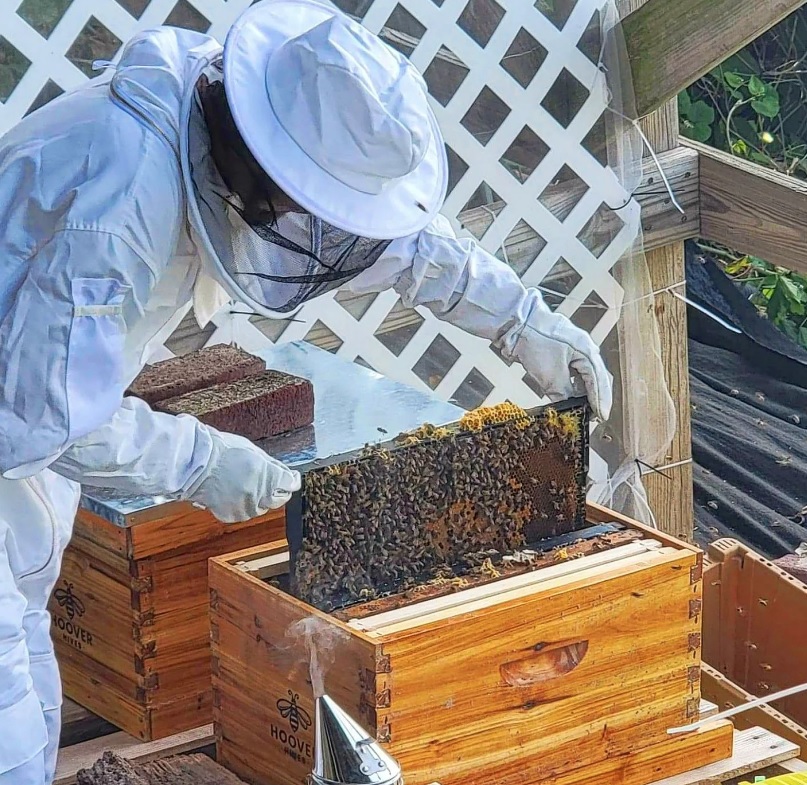 If you have read any recommendations when it comes to starting a home apiary, one of the biggest and most common pieces of advice is you should start with at least two hives.

Oh my how right they were!

Our property is zoned for up to four hives, but for our first year we decided to only start with two due to cost and the fact that we still weren't confident this was a good idea.

One hive killed it- it did everything by the book and even produced a few pounds of harvestable honey in its very first year (a rarity for most hives). The other hive collapsed- the queen always seemed behind the other hive in producing eggs, she ultimately died, and the replacement queen either died or absconded. By the end of the season I had one hive that was fully prepared for winter and one that was more or less “dead”.

But in having two, I could see the differences firsthand. Had I not seen a proper hive side-by-side, I may not have identified as many of the issues as I did with my first one. My management techniques failed, of course, but having the two hives at a minimum is one of the best ways to learn on the fly.

Courses and Mentors are Your Friends

When you read articles about how to start beekeeping, the most common piece of advice is to get a mentor. Part of this is because you'll have someone to send 1,000,000 questions to (as you most certainly will have tons) and part of this is because if they are local they could show you their hives first-person (the best learning experience).

I do not have a mentor.

I know a ton of beekeepers that I talk to in passing, and have been meaning to talk to neighbors about shadowing them, but I simply dropped the ball and never made it happen in year one. (Partly because by the time our permit was approved to nucleus colony pickup was a few days max- we truly didn't know we'd get hives at all and it was a whirlwind once we got approval.)

That being said, I did take Penn State Extension's online beekeeping course and have read countless articles, books, and blogs as well as watched many hours of YouTube videos on all things beekeeping. I may be an outlier, but exhaustive research here did make me feel rather prepared for most things that were to be expected in year one.

So do as I say not as I do here. Get a mentor. Take online courses. Read and watch a ton of videos. Join beekeeping Facebook groups. Take in every bit of information you can so you, at a minimum, always know what to expect at any stage of the process.

You Either Will Get Addicted or Give Up 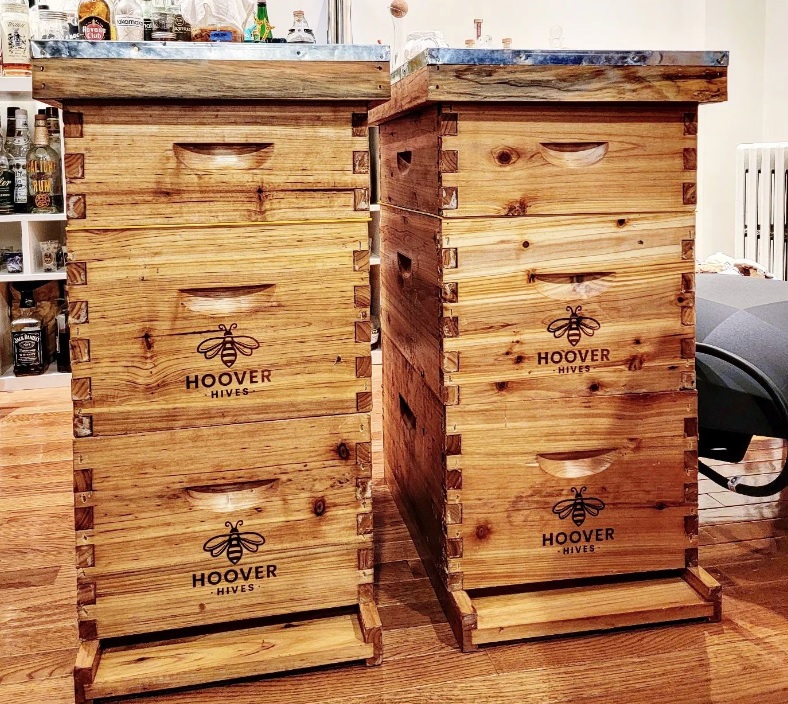 There is a recurring joke in beekeeping that 80% of first-year beekeepers give up before the start of the second season. I'm not sure there is any actual proof of this via studies, but once you see questions and commentary in Facebook groups, well, I can see how this statistic may actually be true.

When it comes down to it, you are either going to love beekeeping or hate beekeeping. I truly do not think there is any middle ground here.

I, fortunately, love it. I find beekeeping to be relaxing. It feels nice to be doing something “good” for the environment (don't comment to argue here, I won't entertain this). It makes me feel more in tune with nature as I watch for what is blooming at any given time. And, perhaps most importantly, I simply have the time and resources to get into the hobby properly (self-employment win!).

There are many reasons people give up. Beekeeping is expensive- upfront costs, time, and recurring expenditures are not insignificant. You don't have a guarantee you'll get honey in any given year (not just year one, but year two, three, and beyond). Some people have far worse reactions to stings- more than they previously thought. And so on. The list of negatives for beekeeping can be near endless if I try, and honestly the vast majority of people who want access to good honey simply should just go buy it in the store (our analysis of how long it takes bee hives to pay themselves off illustrates this point nicely).

As such, at the end of my first year, I have really adopted a black-and-white view of beekeeping in this regard. If you don't go all in, you may not like this hobby nearly as much and could get yourself on the road to quitting before things get good.

Beekeeping Accessories You May Need

Need to procure some additional beekeeping accessories for your hives? Check out the following!

Or, if you need to get hives outright, pick-up preassembled waxed Hoover Hives from Galena Farms. Use discount code HIPSTERHOMESTEADERS to take 5% off your order! 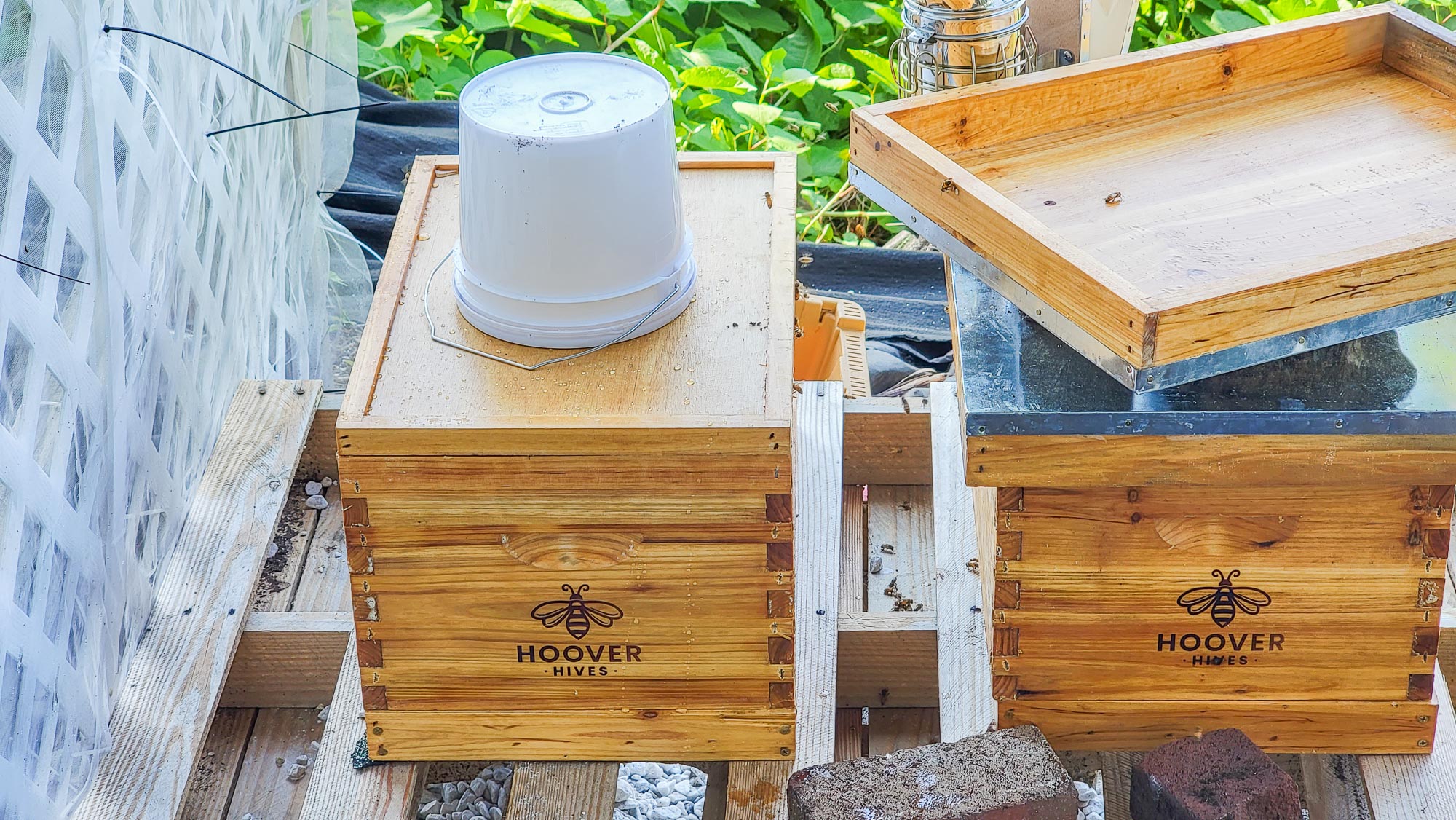