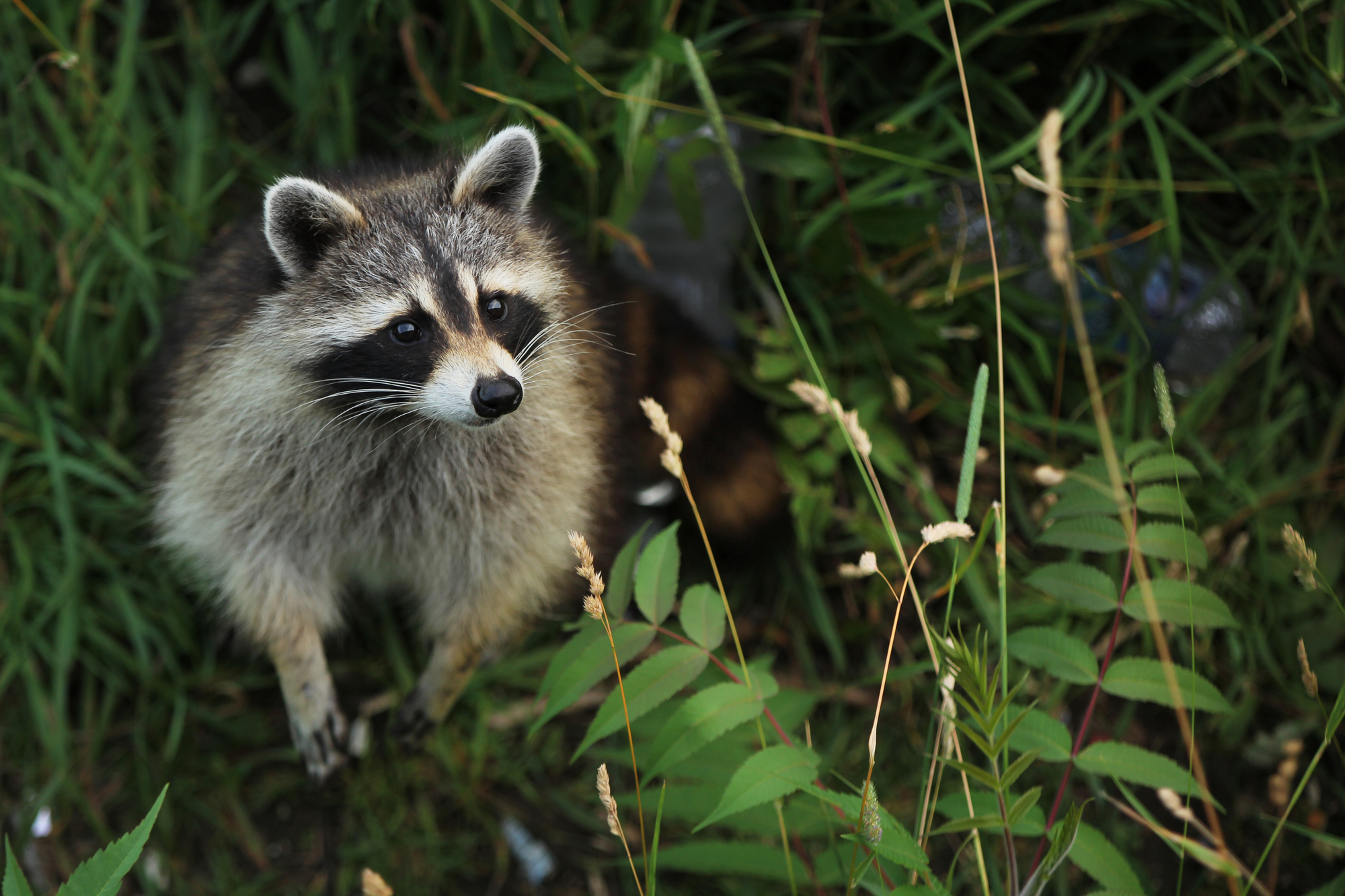 We are quite fortunate to have a south-facing deck that is large enough to allow us to container garden in the summer and fall. Every year we put out many pots of tomatoes, peppers, herbs, and other items to enjoy the bounty of our prized deck.

In a recent season, however, we had a problem. A big problem in the form of a cute raccoon that decided to call our deck home and eat everything in sight. As it turned out, grease from our smoker had dripped onto the decking and attracted a raccoon, but the plentiful tasty fruits and vegetables caused it to stick around.

After trying many raccoon repellants, we quickly learned that most did not work for our scenario. But after trial and error, we found one that worked. So in this one, we wanted to share what we tried, share why some items didn't work, and discuss why spike strips were our answer.

How We Found We Had a Raccoon Problem

Our first interact interaction with the raccoon was a bit of a surprise. My mother was watching our house while we were on vacation and we found some of the tomatoes and peppers to be plucked from our pots. This is normal for squirrels occasionally, but the degree we saw of this one was more than normal.

Shortly after this happened, our dog became fascinated with a little space behind a storage container we had on our deck. Upon further inspection, my mother found a raccoon hiding behind the deck in the middle of the day. She called Animal Control out of an abundance of caution, but it scurried away before they could do anything about it. It wasn't rabid- just sleeping in a dark space. 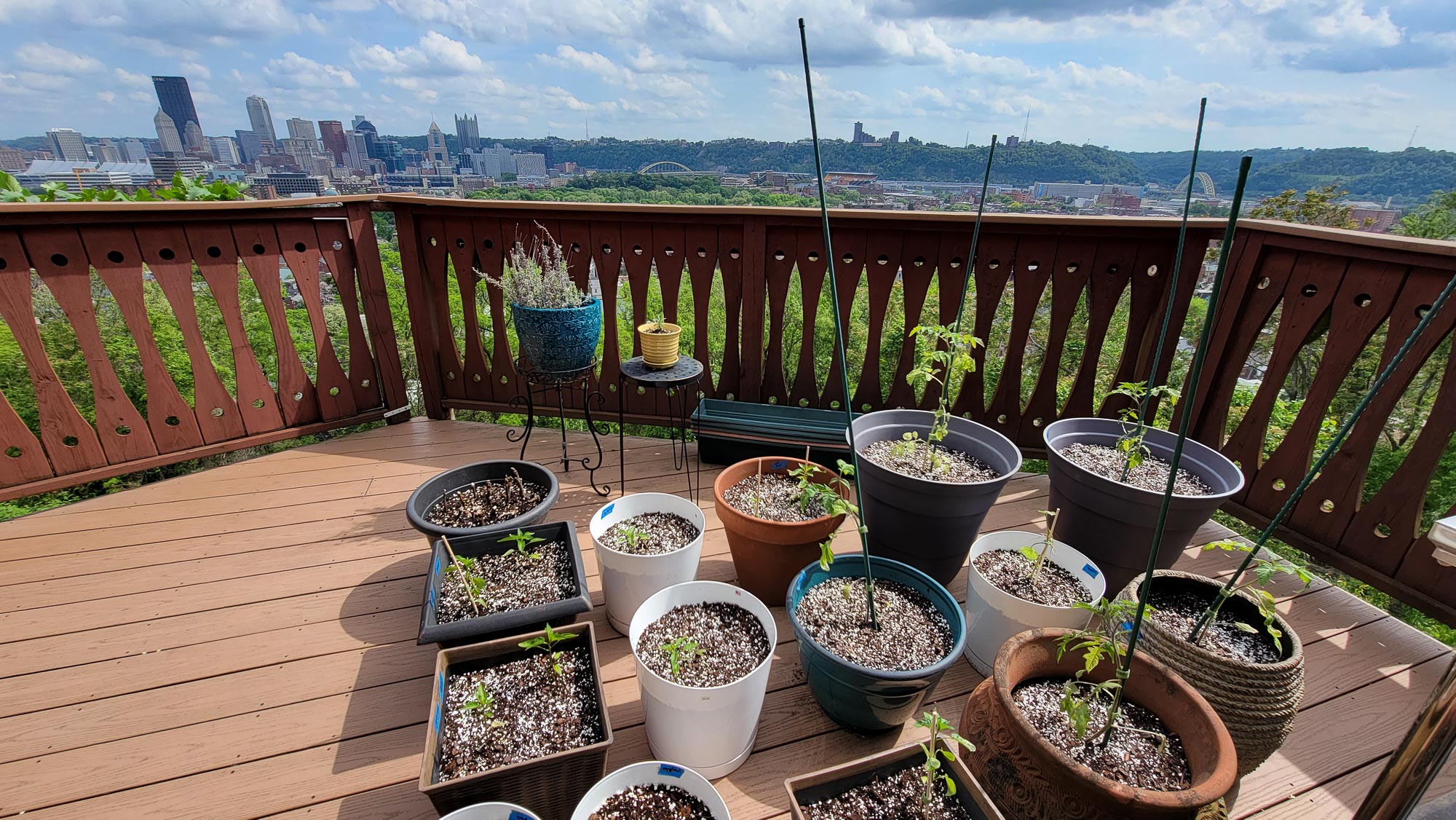 We thought that would be the end of that, but a few days later our fruits and vegetables started to get destroyed again. Once again, our dog was going nuts on our deck, specifically smelling underneath our grill cover, and when we opened it up a raccoon came bolting out and ran off our deck. I sprayed it with the hose for good measure (the only thing I could think of at the time) and it ran down our deck to the ground below (we should note our deck is 30 feet off the ground, so it took some real climbing skills to get up there).

After calling a service that captures animals, we were told how the raccoon was climbing on our deck and given a quote for capture and removal- almost $1,000!

We decided to take matters into our own hands by testing raccoon repellant devices and chemicals to see if any would work. We ended up spending far less than $100 in total, and solved our raccoon problem fairly quickly.

We tried many things to assault the poor creature's senses (smell, vision, taste, and touch) and found that the only real thing that stopped the raccoon was physical discomfort! So let's talk about what didn't work before working our way up to things that did. 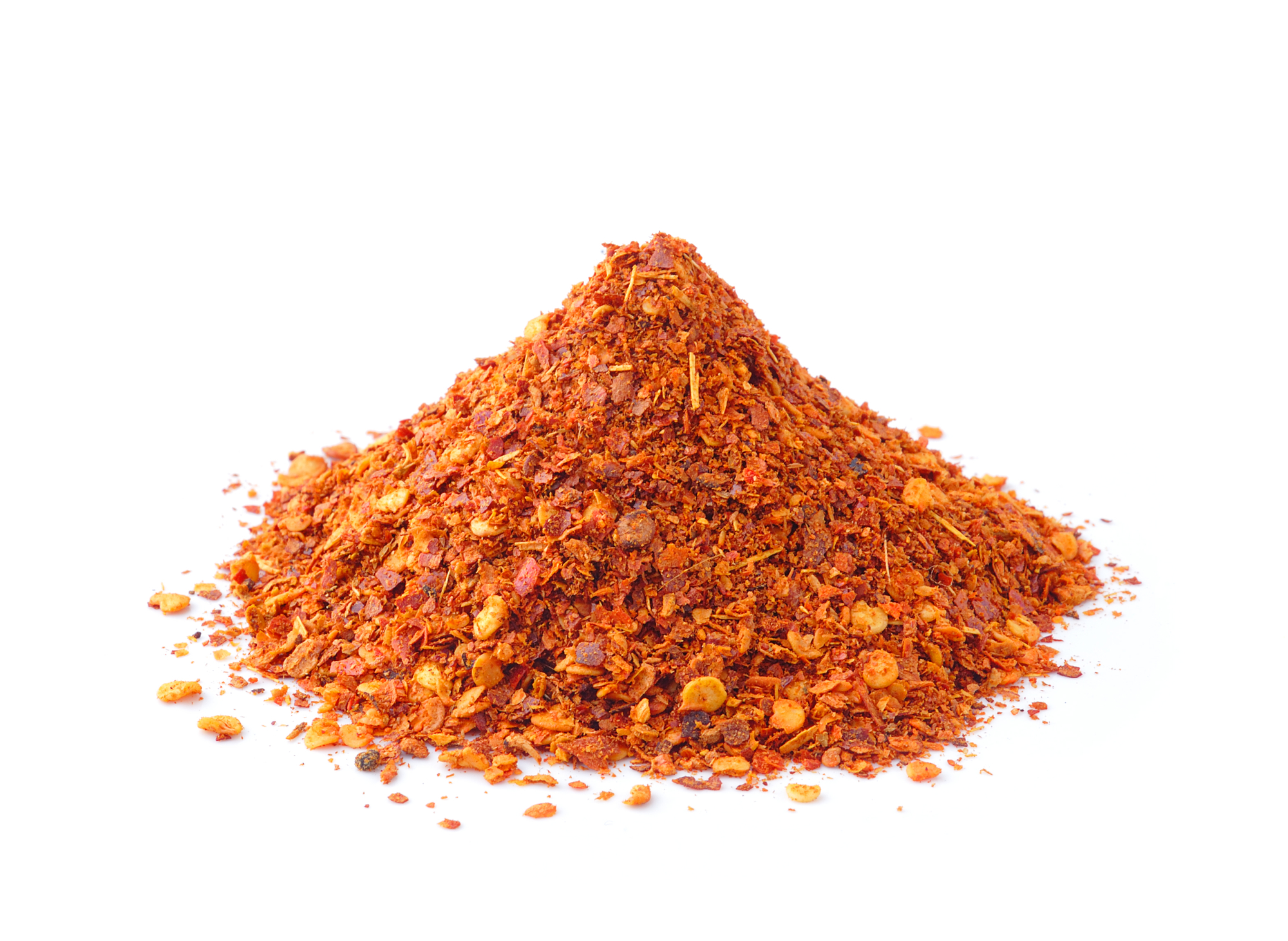 The first thing we tried was cayenne pepper sprinkled liberally into the dirt of each pot and on our decking. This has historically helped us deter squirrels that would invade our deck for the same exact reason. We had a five-pound cayenne pepper tub on hand because of this, so it cost us virtually nothing to see if affected the raccoon's taste enough to get it to not come back.

The raccoon was hardly deterred. While it did look like the raccoon didn't like to eat the vegetables that had cayenne on top, it would still bite into them and throw them to the ground- ruining it for us all the same. The extra spread of cayenne on our deck railing and flooring appeared to not bother it at all, either!

Verdict: Don't Bother- although we didn't really have a squirrel problem for a long time after that. 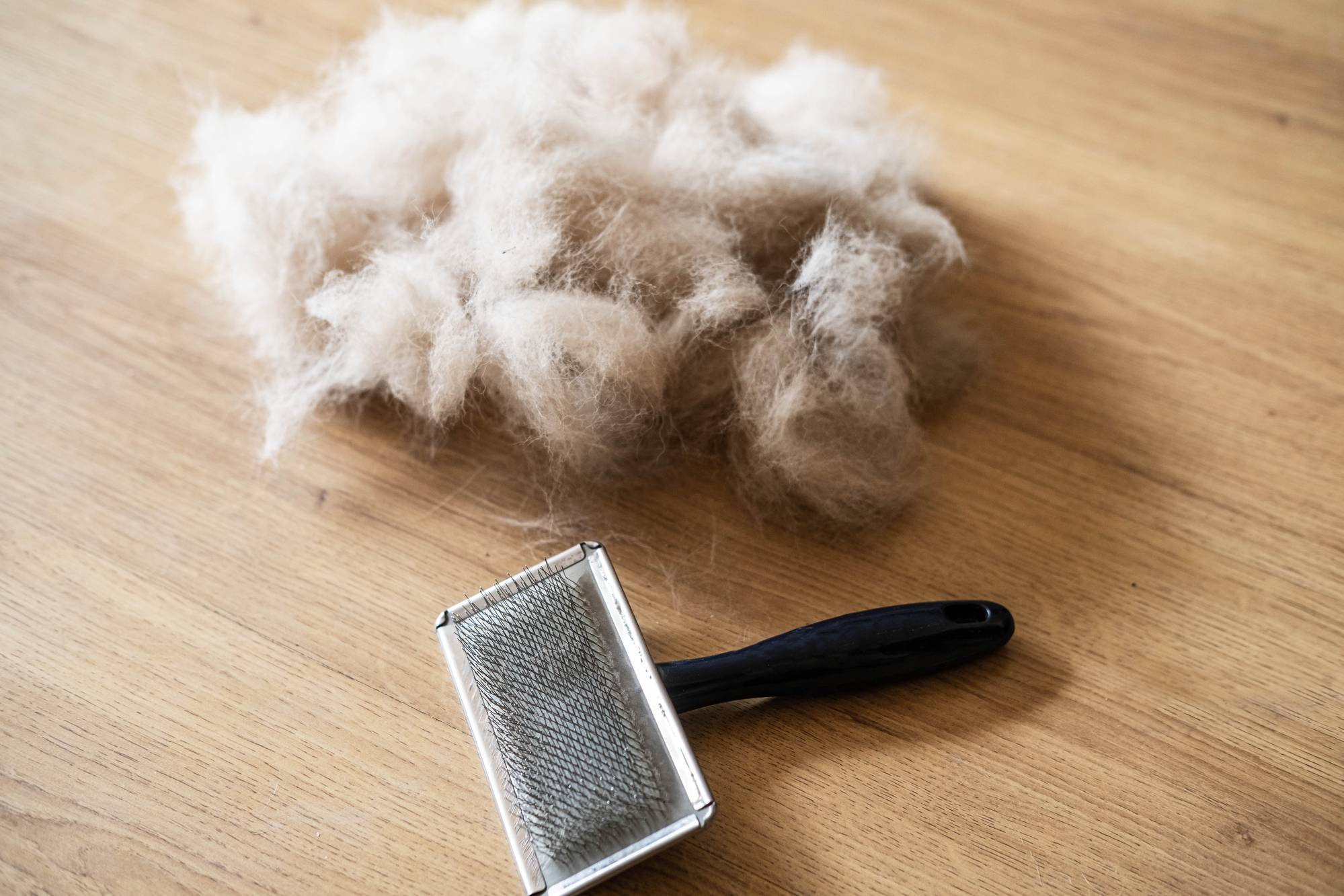 The next thing we tried was using hair from our dog sprinkled into each pot to see if the smell of a natural predator would deter the raccoon. Our dog unwillingly gave us many free handfuls of fur with a thorough brushing, and we applied the dog fur to our pots both on top and partially buried.

It had no effect. Whatever our dog smells like to a raccoon, it simply wasn't menacing. This isn't a surprise though considering our dog wanted to play with it when she spotted it on our deck.

Verdict: Can't hurt to try if you have a dog, but don't expect much. Just don't put fur into pots with edible produce if your dog recently had a flea and tick treatment out of an abundance of caution. 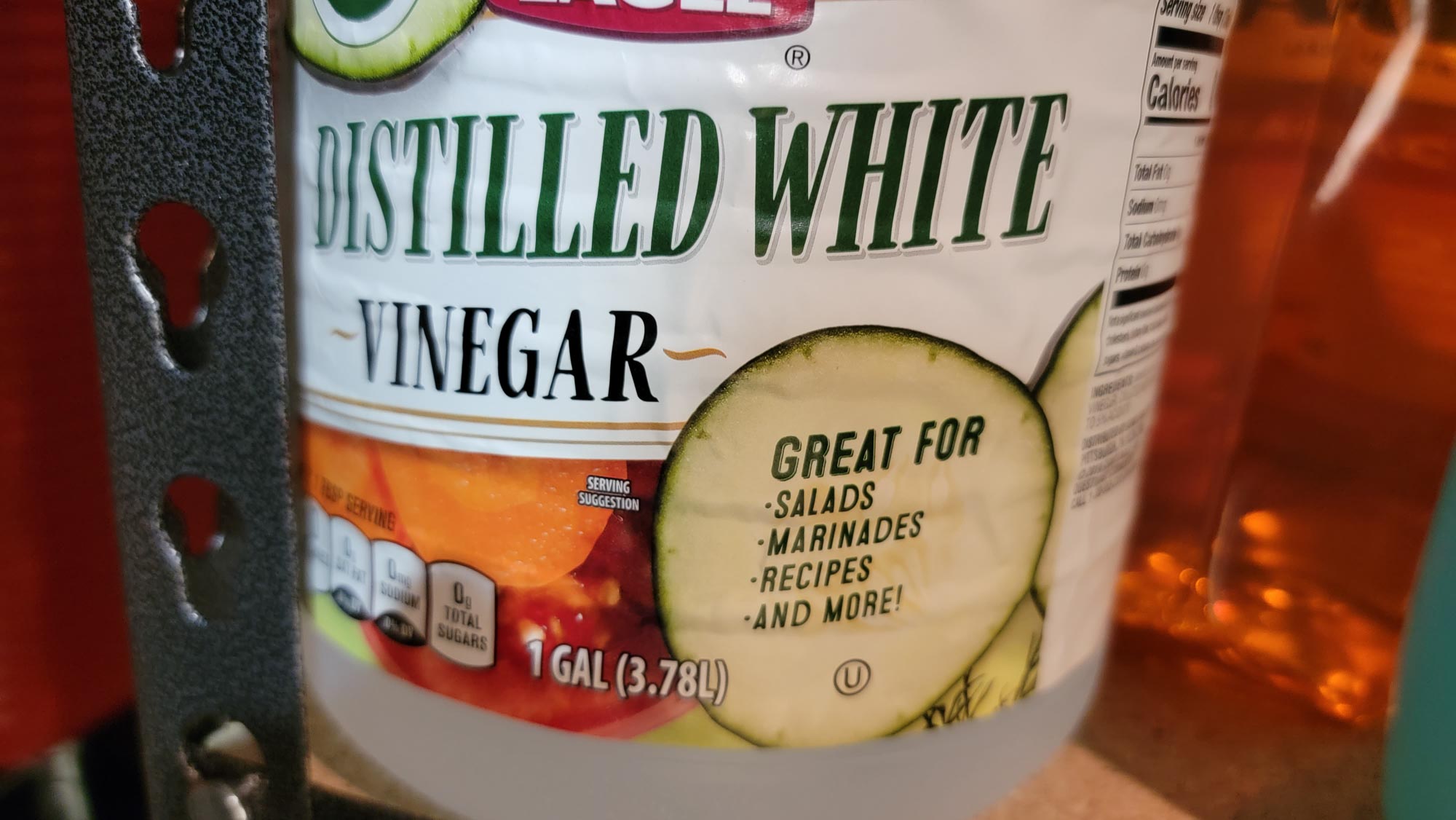 We stayed with aroma deterrents for our next test and decided to spray a liberal amount of vinegar and ammonia around the bottom of our deck as well as all the support beams the raccoon was climbing up. As we normally enjoy our deck ~30 feet off the ground, we could get pretty aggressive with this and not smell it when outside (but your mileage may vary here because it is pungent).

We even got a concrete block and filled it with vinegar and ammonia-soaked tennis balls to try and get the smell to linger for a while after the inevitable rains washed the first application away.

Not only was the raccoon not deterred in the slightest, but it also pulled the tennis ball out of its secure holding and threw it down the hill!*

Verdict: The raccoon didn't seem to like these smells, but it also just found an escape by coming up our deck anyway. Closer applications to the garden may have helped, but the frequent rains also washed most of the smell away quickly so any benefit is likely nominal at best.

*We assume the raccoon threw the ball down our hill. It was wedged into a concrete block rather securely and I cannot think of anything else that would have the dexterity to remove it multiple times. There was zero chance it was removed by the wind or rain.

Next up we had to go shopping. We bought animal deterrent sprays from a local home and garden center that smelled, well, awful. If you think ammonia smells bad, wait til you smell one of these. It smells like mint, garlic, and dead things all mixed together and is said to be all the things raccoons hate (raccoons and apparently everything else- it was so bad).

We did the same application as with our vinegar and ammonia but got even more aggressive and sprayed it on our deck itself. Much like the above, this helped a little, but after a day or so and especially after the rain most of the scent was gone and the raccoon was back.

Verdict: Perhaps a short-term solution in a pinch, but having to reapply this over and over again is a stinky and not cost-effective solution. Likewise, if you're anywhere near it, the smell will be terrible 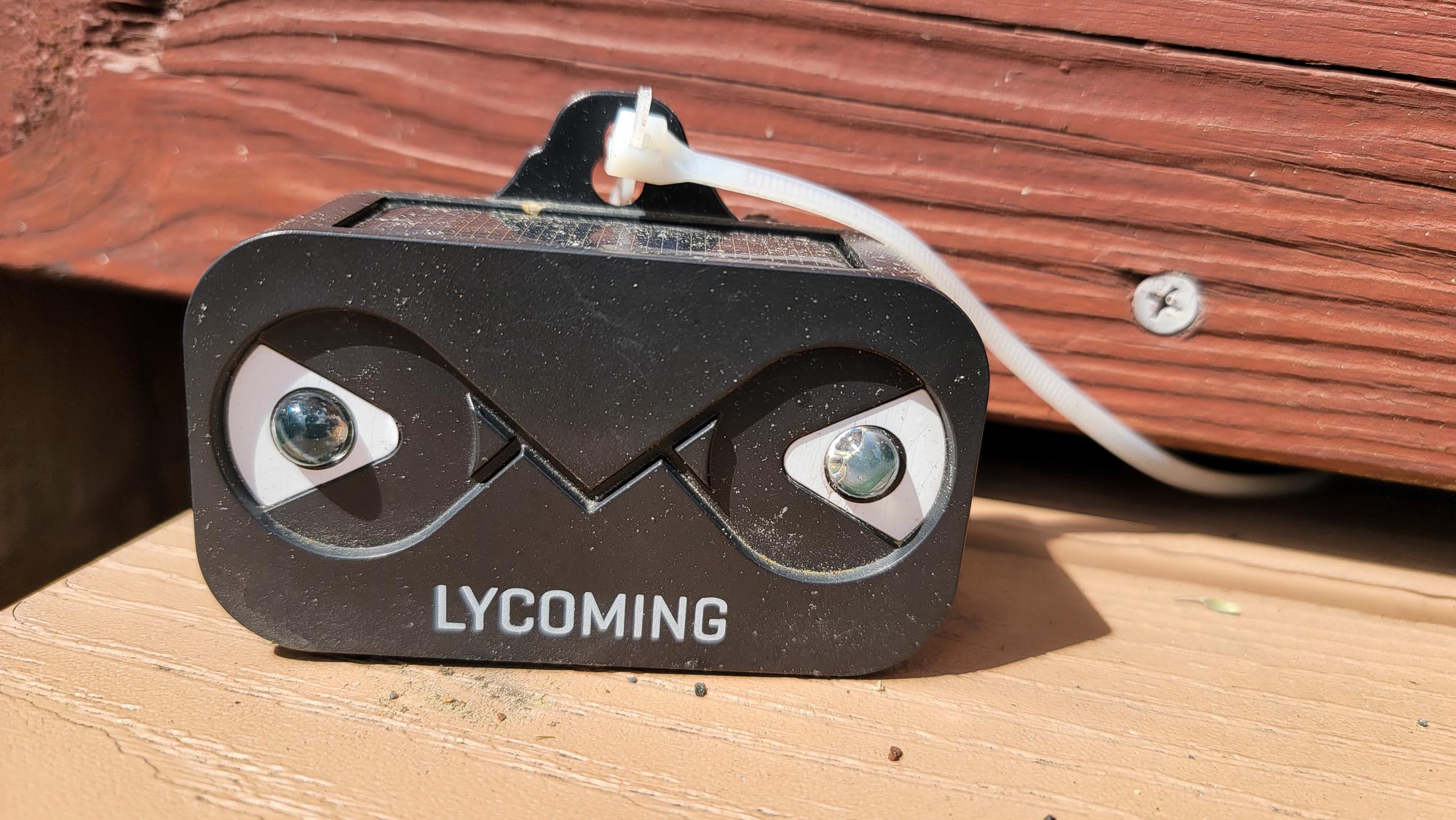 Since taste and aroma-based deterrents let us down, we went for a visual one next. This was in the form of flashing predator lights that are solar-powered and blink red to mimic what a natural predator may look like at night.

At first, we thought this one worked. We had a few days raccoon free. But this may have been a coincidence because after about a week our raccoon returned to our deck as it likely realized that these were not predators at all. Sigh. If we had a bigger garden that was away from other houses (and us most of the day), we probably would've tried one that both flashed and used ultrasonic noises, as we've heard of some success stories with these- but we simply were far too close to have to endure the horrific noises they make.

Verdict: Raccoons are too smart. If your garden is far away from humans most of the time an ultrasonic one may be a good test, but otherwise they're not worth it. 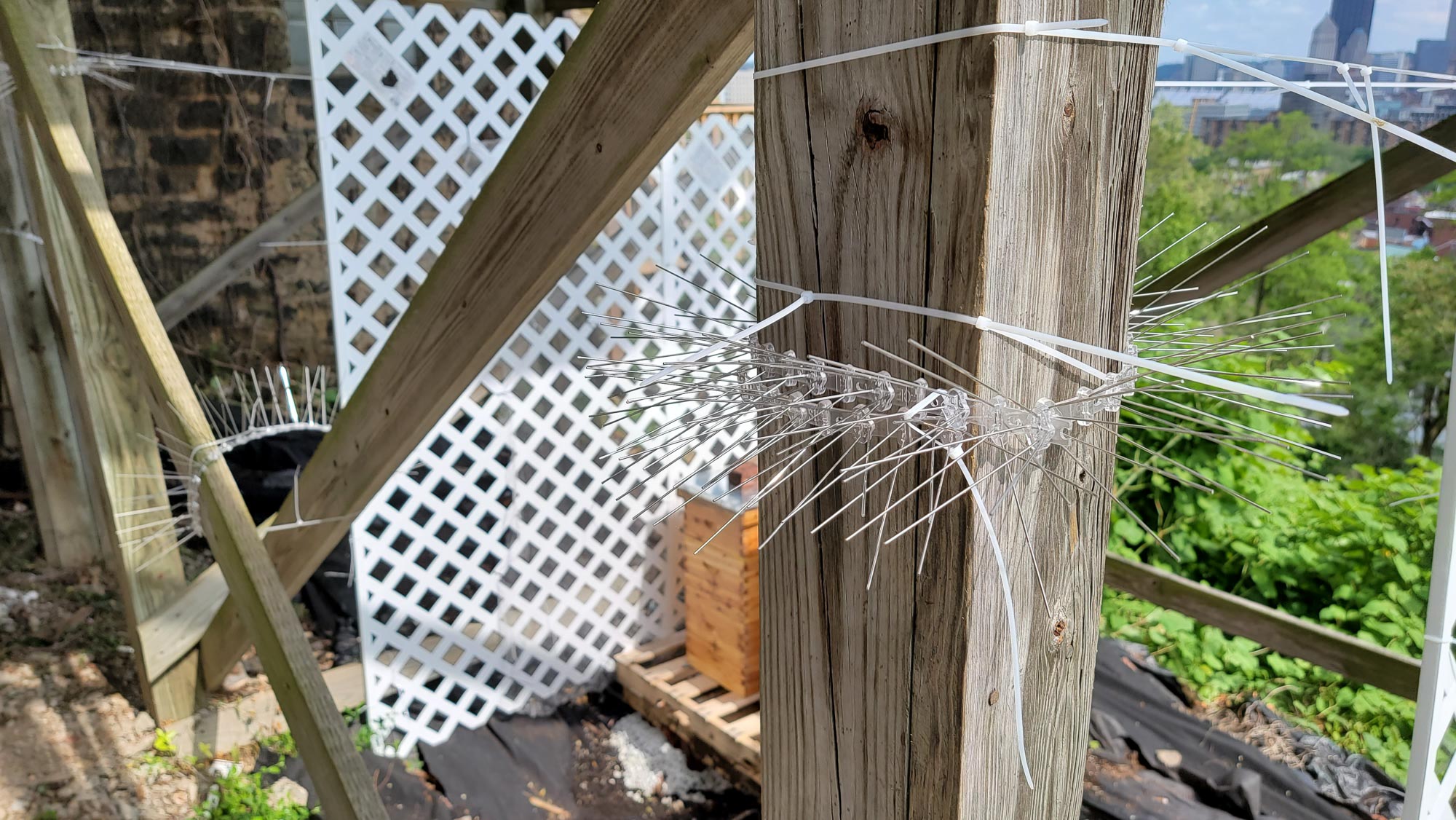 Now we were running out of senses to mess with for our raccoon, and we were getting pretty frustrated. It was at this point that I found out that raccoons are very dainty creatures and do not like pain in the slightest (they are, of course, extremely intelligent so this makes sense). So I thought, what about spike strips that are used for birds?

I put in an order for a dozen, plus some zip ties, and hatched a plan when they arrived. As the raccoon was climbing up our vertical deck posts, I wrapped these spike strips around the beams and secured them using the zipties so they would hold into place. The spikes themselves are quite long and we were able to wrap them in such a way that the raccoon would have to climb over them to reach our deck.

This means spikes to the paws and spikes to the belly. We just hoped the spikes would be long enough to cause enough discomfort that it would not be motivated to go on.

It wasn't. This one unequivocally took care of our raccoon problem, and shortly thereafter we heard about neighbors dealing with the little menace that we had evicted. Hooray!

Verdict: This one worked with flying colors. They were kind of a pain because they required assembly (plan for an hour for a dozen), and your mileage may vary on your ability to place them around your garden. But if you can make it work, these are the ones to try. No more critters on our deck other than the squirrels that jump over from a neighbor's downspout! Thankfully, we still have a ton of cayenne left for them.

When it comes down to it, we tested many raccoon repellant options that assaulted the poor animal's senses of taste, sight, smell, and touch-based on recommended solutions we found online. The raccoon was slightly deterred by aroma-based sprays but these only lasted so long as they wore off over time and especially so after a rain.

In the end, a touch-based deterrent in the form of spike strips ended up being our permanent solution and we have not had a raccoon issue since then. If you are able, I would recommend starting with these first as they are quite reasonably priced and will stand the test of time as opposed to some of the other options!

Have you figured out how to stop a raccoon in a garden? Comment below to share your solution!