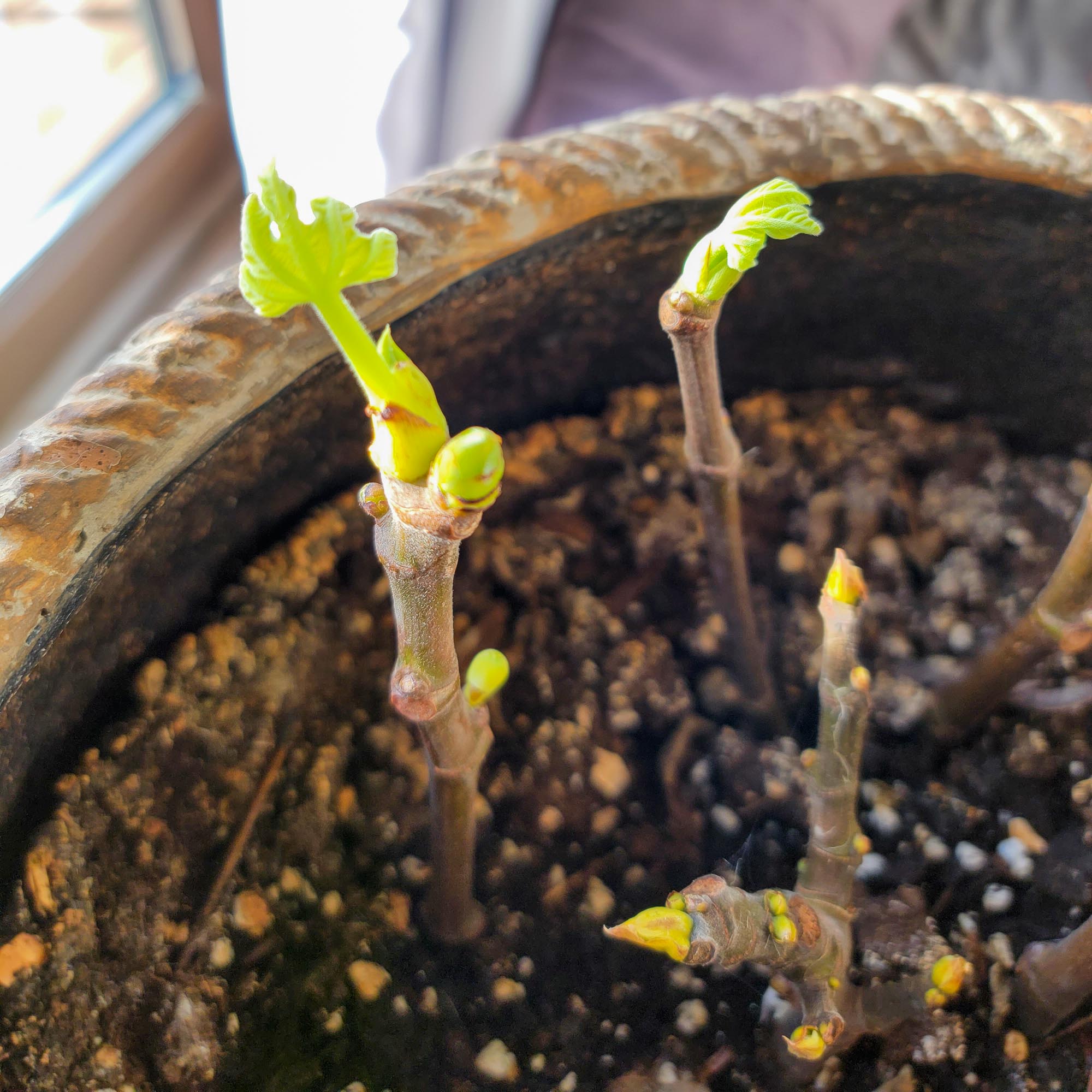 One of the goals we have here at Hipster Homesteaders is to work on building a garden on our 3,000 square foot, south-facing hillside.

While we have many challenges associated with this, one of the biggest is that we've found buying young fruit bushes and trees for planting can be quite expensive. With the going rate and how much we want to plant on our hillside, buying all the plants, even from local sources, would cost thousands of dollars as most cuttings range from $10-$25 a pop.

Thankfully, plants are incredibly versatile. Many fruit plants can be grown from saved seeds from the previous season and others can be propagated via cuttings outright. Over the years, we've found that there is no shortage of cuttings available from neighbors in Buy Not a Thing social media groups, and as we learned more about plants, we've found many wild berry patches to cultivate from as well.

One of our first attempts at this process was with fig trees as they're known to be quite easy to propagate via cutting. We purchased a couple of trees at our local farmer's markets and received cuttings of white figs from a friend as well. When we wanted to propagate our two trees into a small orchard (along with the gifted cuttings), we thought it'd be fun to put together a fig propagation test to see what technique works the best!

In this one, we wanted to share our process and our findings. 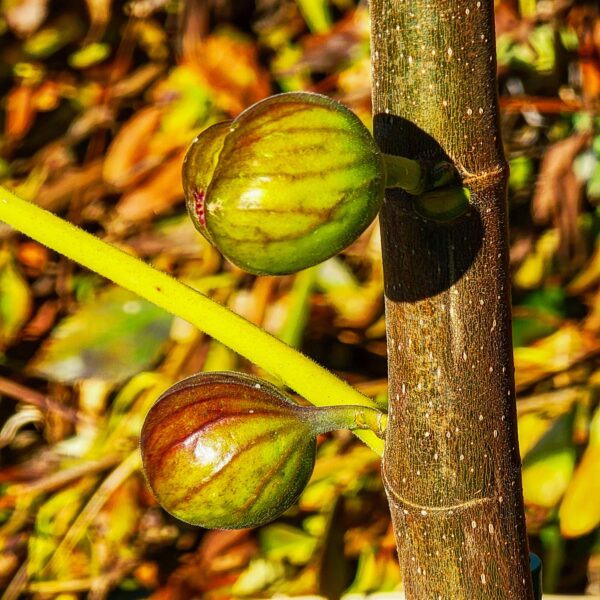 When you research the best way to propagate figs, you'll literally see every technique under the sun come recommended. Root in a cold, dark place or a warm place. Use root hormone or don't. Propagate in the summer or winter. Only root thick cuttings (> 1″ diameter) or thin (anything thicker than a pencil). Keep the soil wet or lightly mist. Use nutrient-deficient soil or fresh soil. Cover to keep in humidity or don't (admittedly, the latter recommendation is rare). I could go on.

Despite the variations in published best practices, the recurring theme is that figs are one of the easiest plant species to root from cutting- especially when they're dormant over winter and do not require as much water for survival. (Propagation is a fair harder in the summer, but we'll talk about that later on.)

As there are so many different recommendations of how to propagate fig cuttings, we thought we'd put together a test of three common ones to see what works best for over-winter rooting. They were the following:

From there, the cuttings have had a number of variations we are hoping to track as well. Some cuttings were planted without root hormone, some were planted with root hormone. Some were scratched slightly near a node to help roots take hold, while others were not. For the in-ground test, we also planted some cuttings of small size (6-12″) per traditional recommendations as well as some that were much larger (2-3′ tall) just because we had an abundance of large cuttings gifted to us.

As a final security measure, we also saved some cuttings in a plastic bag with a wet paper towel in order to keep them dormant in the refrigerator over winter in case all of these tests failed. I intend to plant these in the spring for a final test as well.

Suffice it to say, we are testing just about every recommendation out there and this is likely overkill since we only really need 2-3 trees to survive for our planting needs (the rest we intend to give away if we have any luck).

The Test is Ongoing – Initial Observations 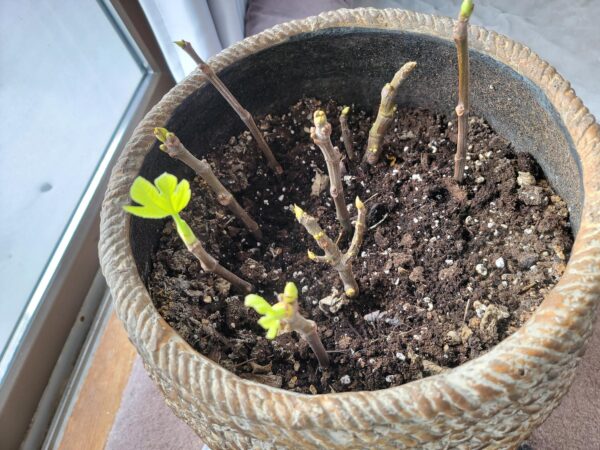 As of now, this test is still ongoing so we only have a few initial observations through January.

After about a month and a half from planting (mid-January), all of the cuttings were still alive per a scratch test- including those that were winterized outside and experienced some cool temperatures as low as about 15 °F. This gives me a fair bit of hope that they will all survive come spring; however, temperatures could drop to as low as -5 °F which may pose a challenge.

Some of the cuttings that were placed indoors by the radiator experienced budburst already, so we removed their humidity cover and placed them near a window for light. They did quite well for a while, but sadly we had a cold snap for a few days where the plants likely did not get enough radiative warmth (despite the room being held between 68-72°F) and the new leaves withered. The cuttings still seem to be alive; however, so we covered them and moved them back to the radiator.

Out of curiosity, at this time I moved the cuttings around in the pot to provide more space and I made a fascinating discovery- the cuttings that had leaves had roots about 3″ deep while those that had no leaves also had no perceivable roots (just little nubs of roots starting to form). The root hormone is likely the biggest culprit for the differences between these cuttings in the same pot. So, for now, we're just going to let them be by the radiator as before and wait til spring.

The in-ground plantings are the real wildcard here and we can only predict how they will fare. All we did here was dip the ends in root hormone and cover the trunks in burlap. They're far away from the house to likely not get any appreciable radiative warmth, so they're really on their own to our winter conditions at large (but are planted on a downward sloping hill, which could help with some freezes).

How well these cuttings will fare is really a coin toss to me. I've read that thick cuttings (> 1″ diameter) often have an easier time to root, but these are also ~3′ tall and I suspect would need a pretty robust root network to survive past spring. It'd be a real treat if they do survive because these branches have dozens of buds ready for new growth that could make for a great first year if all goes well.

We will revisit this in April/May 2022 and update accordingly! 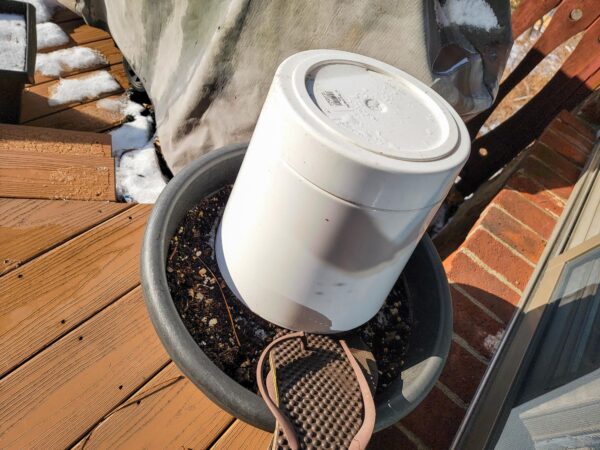 When it comes to rooting fig cuttings, there are some tried and true recommendations that we followed in the above tests. They were the following:

First, cuttings were taken from a dormant tree in late fall/early winter. We've seen that this could also be done in early spring before budburst, but we caught friends right before they trimmed their tree and scored cuttings, so December it was for us.

Second, most of our cuttings were the ends of new growth, including many buds, trimmed to 6-12″ in total length. The bottom cut was taken just below a node (the round line going across the branches). These were then buried roughly 3/4 under dirt and 1/4 above dirt (max 3-4″ above ground). This allowed for more rooting possibilities to take hold while still allowing all the buds to grow into branches in the spring.

Third, we dipped the buried end in rooting hormone on some of our cuttings to see if they would help root better. Likewise, we made very thin cuts vertically along the sides of some cuttings (to expose the green, fleshy parts- not terribly deep) to help facilitate rooting as well. The hormone-dipped cuttings were dipped after these slits were made. I suspect that by spring this will provide little difference, but we did notice the hormone dipped cuttings rooted much faster as discussed above.

Fourth, the pots we used for two of the tests used old potting soil from the previous season. They likely still had some nutrients left but were used once previously by tomatoes and peppers so they have been depleted to some unknown degree. Again, I don't think this is going to impact things, but just being complete in sharing our method.

There are, of course, even more schools of thought on the best propagation techniques, but these are all the possibilities we attempted to address.

Can You Root Figs in Summer? 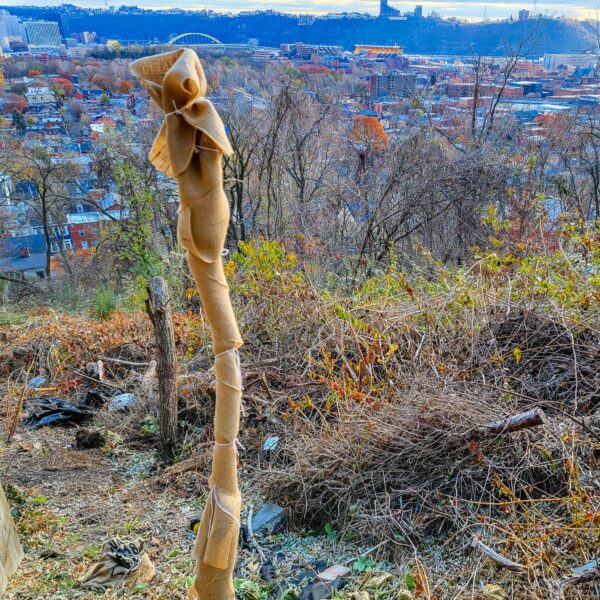 To end this one, we thought it'd be worth discussing our tests for summer fig propagation a bit more for those who are interested.

While summer propagation of figs can be done, the reason yields are typically lower is simply that non-dormant plants require more water than dormant ones for survival. When you cut them, you're cutting off all the roots that take up water. This disrupts the evapotranspiration process that plants undergo which takes water up from the soil, traveling up the trunk and branches, and coming out as water vapor from the leaves (where CO2 then enters for photosynthesis).

As such, live cuttings need to be in a humid environment at all times to help them take on water via the stem and leaves (or, an alternative way to look at it, to minimize water loss via evaporation) while new roots are developing to resume water uptake.

Make them too wet, mold will likely develop, and they'll die. Make them too dry and they'll also die. We had both cases happen to us because our systems for trapping in humidity just weren't that great. Too loose a cover, humidity escaped and they died. Too tight a cover (especially if they touch the cuttings), mold developed. Plants that were kept in water were dealt the same fate too. In all our tests in the summer season, just one cutting survived long enough to root in the ground on its own out of well over a dozen, and now we're in a waiting game to see if that one survives winter dormancy.

There is a reason so many who propagate figs suggest a greenhouse is the best for summer cuttings, and from our experience, we can see why that is- maintaining the right humidity is challenging.

If you do attempt summer rooting, we would highly recommend using root hormone to speed up the root development process (we did not), and covering your cuttings with a large, plastic housing (like a 2 L bottle or a larger pot) to trap in humidity. The caveat here is that whatever covering you use should not come in contact with the cuttings at all as any contact could be a point for mold to develop. Then it is a matter of being careful with how much water you add either via lightly wetting the soil or misting.

No matter what you do, when rooting figs in summer or winter plan on starting a decent volume of cuttings because even in the best scenarios odds you may run the risk of losing some for one reason or another. This is obviously more likely in the summer, but when we're talking long timescales like these it is best to be prepared no matter what. So if you want one fig tree to survive, plant six. If you want six, plant twenty. Scale helps when propagating fruit cuttings and worse case you will have extra to give away!

Overall, we suspect that rooting in the winter has a far greater chance of success purely from the fact that cuttings need far less water in order to survive. This, in turn, gives the roots a better chance to develop before they need to take in water. So as long as you wet the soil and/or mist the cuttings every few weeks (or less frequent) and they should have enough moisture to survive- you should have good odds of success come spring!